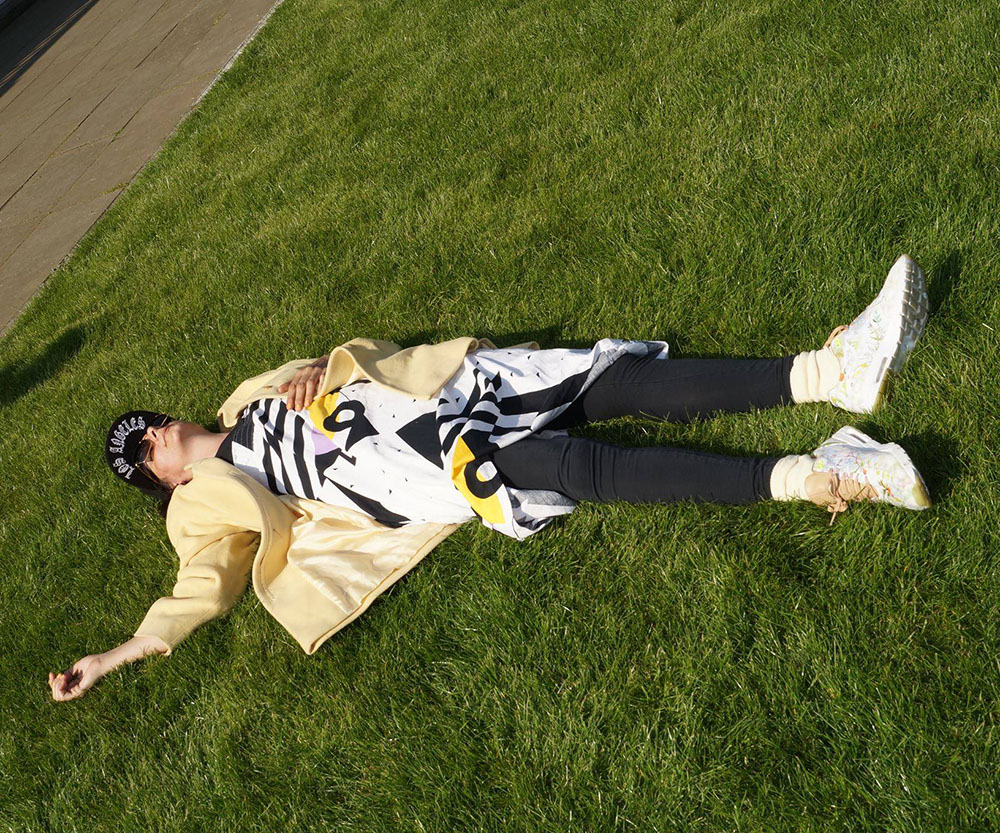 Nina Coulson spoke to us about how four leaf clovers have invaded her artistic practice and led to her to produce her unlimited edition for infinite multiple ‘Et in Arcadia ego’.

Infinite Multiple: Can you tell us about where your inspiration for breeding and cloning four leaf clovers began?

Nina Coulson: It started in 1998, when I was at art school studying for my first degree in Interactive Art at UWCN in Caerleon, Wales. My childminder’s sons came by our house to play a few times, and they kept finding and picking four leaf clovers from the front garden. After the boys showed me where they grew, I thought it might be fun and interesting to do something for my degree show with the few hundred that I found. But I soon had to move house and when I returned a few months later the landlady had put weedkiller all across the lawn and was about to turn it into a paved driveway. Luckily I managed to collect a few barely living root cuttings and brought them to my new home (in Worcester, England) where I kept them in water and hoped that they would take root.

I was fortunate that the cuttings survived, and furthermore they began to mutate and continue to grow substantial amounts of four leafers. I later found out the probability of mutations were affected by a complex combination of genetic and environmental factors. As luck would have it, the clover plant that I discovered was a 1/1000000 chance pure genetic mutant and its cuttings (or children) also produced further mutants.

After that I realised that the project would continue for as long as I found them. So it wasn’t really inspiration, more chance!

IM: How does ‘The Four Leaf Cover’ project sit within your broader art practice?

NC: The clover project weaves its way in and out of my practice, like a tangled root, sometimes dying right back almost to non-existence at others periods intensely bred. For example, when I prepared plants for a collaborative solo-show we put on at Cell Project Space, London back in 2005. Running up to that show I had to produce hundreds of plants to be inserted and grown in the installation ‘N55 Kommune System’ so that the public could visit the space and look for a clover. They were allowed to pick them if they found them. During that project I grew cuttings in preparation in a geodesic greenhouse to generate a maximum crop organically.

This year has also been an intensive growing period as I was given a new batch of seeds by scientists at the Grassland Development Centre, Aberystwyth, who sent me selected seeds archived in the Genetic Resources Information System (AberGRIS). This was the first time I had grown clover from selected seed and the resulting plants are available through this commission.

Over the summer I found more than one thousand four leaf clovers in the new stock.

IM: Is there a place that has the biggest influence on your work?

NC: No place in particular, to me everywhere stands equally on a global scale. My father worked throughout my childhood as a continental trucker so my concept of place is that everywhere is just "down the road".

I live in a small town in middle England where there isn’t a lot of awareness or access to contemporary art and for a long time I felt that art was always somewhere else, although I couldn’t always pinpoint where! In terms of my practice I enjoy producing work that plays with the idea of multiple sites or deliberately takes something out of context and inserts it into a new, unrelated location to experience the potential outcomes.

I have found four leaf clovers growing in various sites in Copenhagen, Tokyo, Venice and around the UK. All of which have been gathered and distributed alongside each other, their original site becoming unidentifiable by the end of the process.

IM: What impact does technology have on your work? And how does working outside on growing four leaf clovers relate to this, if at all?

NC: I studied Interactive Arts as my first degree so I have always had an interest in technology and how we use it to relate to each other or how it can be used to spread ideas and create connections between people.

Technology has been pretty vital to this project as many of the international distributions have been initiated through online communications. Iit has also been really beneficial to the project to run a Facebook page (fourleafcloverarchive) where people can add archive stories of their experiences hunting/finding clovers. The proliferation of stories shared online has led me to question if four leaf clovers are more common nowadays or does it just seem it because lots of people discuss their experiences together where previously they were maybe just something word of mouth passed on from generation to generation in the folkloric tradition.

‘Et in Arcadia ego’ has been linked to its audience through live stream and regular daily updates on Instagram since the project began. This not only allows me to mediate the work to a growing international audience but it serves as an archive (although incomplete as I didn't document every single bit of nurturing or harvesting) which I use to refer back to.

NC: I am currently working on a lot of different projects in tandem. I’m just about to submit another funding bid to support a two year programme for MOVEMENT gallery. The gallery is growing as I have found a “second base” project space in London. It’s an old disused cabman’s shelter hut which has been empty for several years. I like it because it’s part of the history of London's Cabbies and it works alongside MOVEMENT as a space that embraces another distinct network. I am raising awareness and funding to renovate it and turn it into an artist-led micro-gallery that will serve refreshments once more through the hatch.

Alongside that I am developing serial bodies of work with my own practice, ready for when I return to the RCA to complete my MA in Contemporary Art Practice in the Public Sphere.

IM: Is ‘The Four Clover’ project influenced by your own superstitions, rituals or beliefs?

NC: I don't think I am super superstitious, but I do say “Hello Mr Magpie” when one flies by. Over the years I have researched folklore and have developed a substantial archive surrounding beliefs connected to the Four Leaf Clover from across the world, some of which I have investigated by visiting their origin sites and forming a mythological incident room enabling me to report my findings back to a local audience.

I feel it would be a really precarious offering, a cruel optimism to offer any concrete results of good fortune with this project. I don't like to make any promises because I feel quite uncomfortable with creating and distributing something that people hold as talismanic during troubled times, just in case things don't work out the way people wish. I have thought about this over many years, and about whether finding so many clovers has made me lucky, but I think I have as much good as bad.