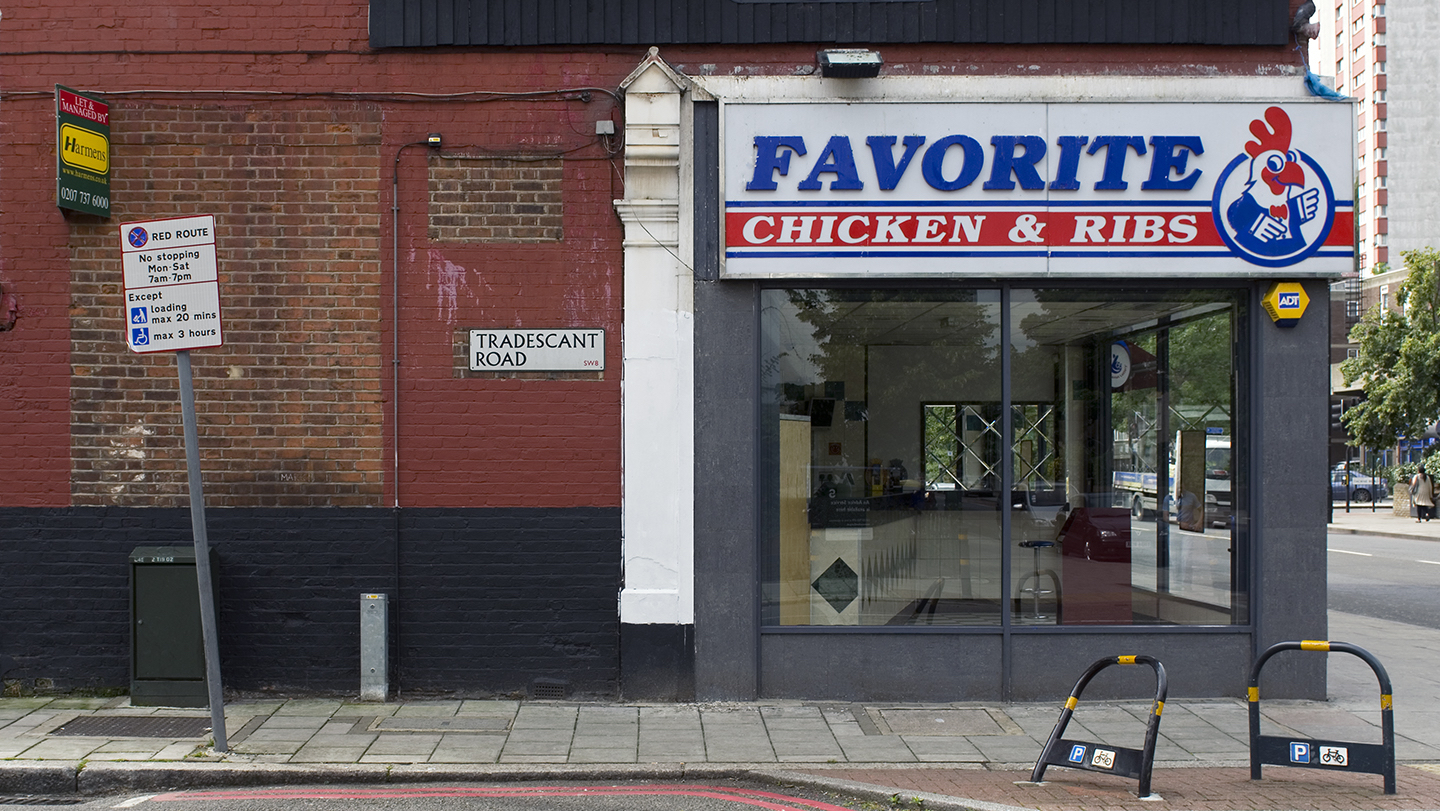 Starting with stone carving and finishing with fried chicken

Sean Lynch discusses how investigations made during an artist’s residency in South London influenced an exhibition in Oxford and eventually led to the creation of an editioned tea towel for the Artist Tea Towel Company, featuring the actual Favorite Chicken and Ribs logo and the iconic figure of ‘Chuckie' the chicken.

Infinite Multiple: The imagery for your tea towel originally featured in your 2014 exhibition 'A Blow by Blow Account of Stonecarving in Oxford' at Modern Art Oxford. How did the Favorite branding and its chicken shop's ephemera become woven into your installation about stone carving? Did you start with investigations at the Ashmolean and then find yourself at the site where Tradescant's Ark once stood?

Sean Lynch: Yes, it’s a complicated and drawn-out narrative, like so much of history! In 2013 I was a resident artist at the Gasworks in London, and began to research the legacy of John and James O’Shea, brothers and stone carvers from Ireland whose fine work attracted the attention of John Ruskin. They were instructed to freely carve upon the new Museum of Natural History in Oxford, but their fierce spirit and sense of devilment resulted in several clashes with University authorities, resulting in many illicit and unfinished carvings that can be seen there to this day. I thought it was a good subject to explore, as the O’Shea’s seemed to bridge many interests of mine at the time, such as artisan craft, public space, and museum culture. As part of this, I began to look at the museum structures of Oxford and I found that the leftovers of the famous Oxford Dodo were once in another collection, Tradescant’s Ark of London.

Tradescant was a traveller, roaming from Siberia to Virginia, searching for new plants and botanical specimens for the British aristocracy of the early 1600s. Along the way, he picked up other artifacts and oddities, and eventually opened his own museum on the South Lambeth Road sometime in the 1630s. No one ever recorded what the building looked like, but for the equivalent of £2.50 you could enter and see. While the rich of the time had their cabinets of curiosities, this was the first public space for the display of objects in the English-speaking world – the British Museum only arrived in 1753. Imagine all the spaces throughout the land that have appeared since, and the growth of an entire industry and culture of display.

The collection itself was fairly eccentric – it is unknown if the dodo was alive when he arrived in London, but it joined other presentations such as Dragon’s eggs, various cheeses, gourds and an instrument used in circumcision. When Tradescant died, an ensuing argument occurred between his widow and Elias Ashmole (who claimed the collection after Tradescant signed a note, allegedly after some Christmas drinks together), resulting in the artifacts moving to Oxford and forming the first museum there.

It turned out that the site of the Ark was directly across the road from where I lived during the residency. And so began an exploration of what replaced the museum, and the presence of a fried chicken shop there (pictured above) and its logo, Chuckie the chicken.

IM: Tradescant had a dodo in his collection back in the 16th Century which sadly never survived to the modern day, which you have said Chuckie can be seen as a revival of - could you elaborate?

SL: Well, the dodo is physically extinct, a victim of man’s accumulative impulse. Every indignity was offered to it - the dodo wasn’t initially plump, but got fat on the journey on the boat all the way from Mauritius. It apparently tasted like chicken when cooked. I think there is a perverse evolution occurring at the South Lambeth road site, as the use of the location has changed, the associative values of a dodo somehow have morphed into Chuckie. I’m a believer that these kind of tangential narratives such be studied closely, especially because they can point out what “progress” in civil society might be and its iconography.

One of the useful and enabling aspects of research in the visual arts is the lack of perimeters or structures to adhere too, as one might have in more academic or outcome-driven work. Instead, a project can start off being about stone carving ending up featuring fried chicken. I’m always interested in art creating a model or paradigm for linking different aspects of the world together that might be denied or kept apart otherwise.

IM: How did Favorite respond to your interest in including their branding in your artwork? Were they willing collaborators?

SL: Firstly, I called by the South Lambeth Road branch, and explained we were standing on the site of the first museum conceived in Britain. Everyone seemed interested, I remember. Later, I visited Simon Woodley, who runs the Favorite company in his office in Clacton-on-Sea, and we began a working relationship. Simon talked me through the day-today realities of running a fried chicken franchise, while also giving generous access to the company archive.

IM: What were the items you selected to bring together from the Favorite archives for the exhibition?

SL: Working with the South Lambeth shop, I removed an advertising lightbox featuring Chuckie from the façade and brought it to Oxford to be displayed, echoing the same journey that Tradescent’s artifacts made by horse and cart back in 1679. A display of archival material from the head office in Essex featured various designs and re-designs demonstrating the evolution of Chuckie and the company’s appearance since the late 1980s. The invitation for the show was a chicken box, flattened to be sent by Royal Mail with an ink stamp on it to give some info about the exhibition times. The exhibition also featured various burger boxes, wet wipes for greasy fingers, carry bags and more, bearing the Chuckie insignia, dotted around the gallery reception, shop and restaurant, more or less looking like someone left them there by accident.

IM: What has happened to the collection of Favorite artifacts you brought together? Do you still exhibit it?

SL: There are some Favorite drink cups, napkins, wet wipes, burger and chicken boxes in Alfabeti, an expansive group exhibition throughout Umbria, curated by Project: Studio A'87 and Viaindustriae until April 2019. In 2016, when Simon Bayliss asked me to do something for his Artist Tea Towel Company project, it seemed appropriate to feature Chuckie, and as a figure that is not only part of the fast food landscape, but that points to the accumulative nature of museological infrastructure and its levels of consumption too.

IM: It is our understanding that an art student at Southend Polytechnic designed Chuckie. Has anyone come forward to claim they created Chuckie?

SL: Not yet. It would be great if that happened. No one at Favorite can remember or has a contact with whoever it was conjured up his shape back in 1987. Maybe this interview, once it’s online, might help!

IM: What exhibitions do you have coming up either as an exhibiting artist or curator that we should know about?

SL: Next month there’s a show at CentroCentro in Madrid curated by Catalina Lozano that features some studies of architecture in Europe, then next summer a new artwork based on research into forgeries of archaeological objects will debut at the Henry Moore Institute in Leeds, as part of the Yorkshire Sculpture International. I’m also co-editing several books in 2019, including a new publication by Irish curator John Hutchinson that I’m especially excited about.