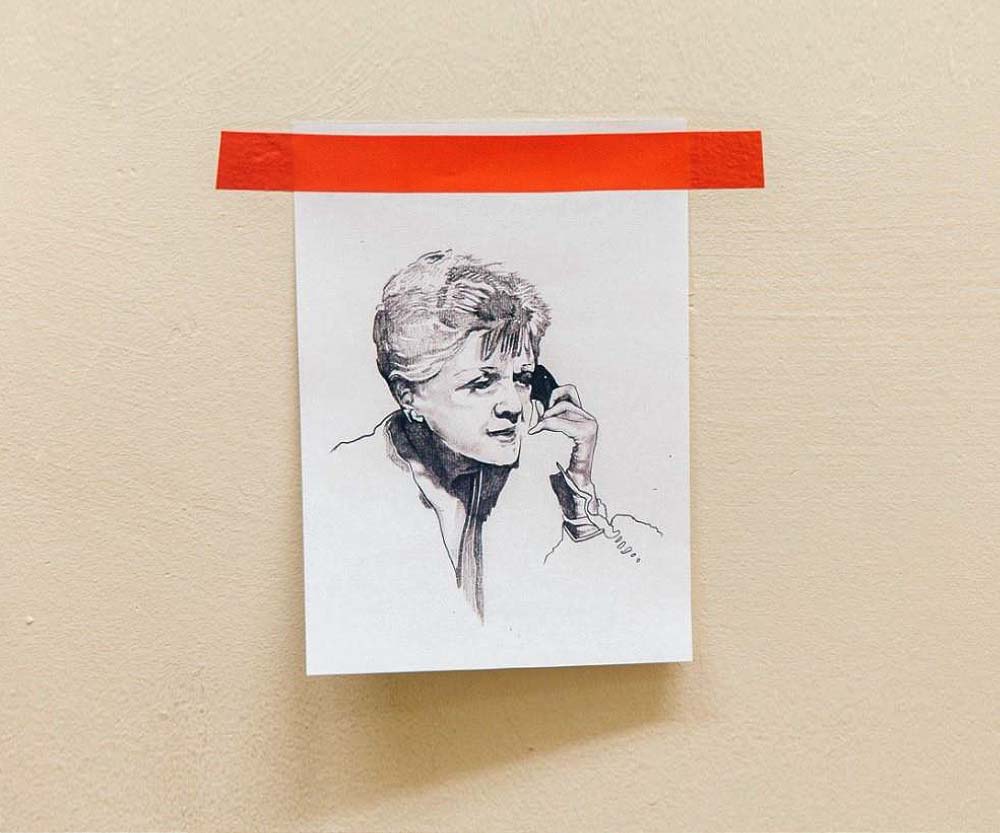 Why Bex Massey borrows from the culture of her childhood

Bex Massey discusses her love of multiples and 80s crime drama, and responding critically to representation of the female form. Bex has created two multiples that will shortly be on sale - ‘Love Is’ and ‘Omnipresent Jessica Fletcher’.

Infinite Multiple: What draws you to capturing and re-appropriating elements of popular culture or the more ‘garish nostalgic’ elements, such as Murder, She Wrote's legendary heroine in your work ‘Omnipresent Jessica Fletcher’ (pictured)?

Bex Massey: ‘Omnipresent Jessica Fletcher’, ‘264 Red Herring’, ‘Fiends’, ‘The Jessie’s’ and ‘Murder she wrote’ were all made on residency in Poplar. Myself, Sarah Roberts and Necole Schmitz spent a week in the former Shoeworld on London’s Chrisp Street Market in an attempt to produce work which questioned the infrastructure, architecture, local history and changing nature of the East End.

Prior to the start of our residency I began to delve into the history of Poplar and happened upon George Lansbury: 1920s Mayor of Poplar, Labour MP, anti-war activist, campaigner in the suffrage movement, seemingly all round rad guy, AND Angela Lansbury's grandfather. I am a huge fan of all things Dame Lansbury flavoured-but none more so than ‘Murder, She Wrote’.  This somewhat forced my hand in focusing my research on my teenage self’s favourite crime solving, witty jape throwing and phenomenal cravat wearing heroine.

Jessica Fletcher belongs to my youth - as do other icons that I have thieved and re-appropriated in my work. I’ve nicked: Owen Wilson (‘He’s so hot right now’), Mel C (‘Hi-ya’), the cast of Byker Grove (‘Àhhá’), motifs from a Collier Campbell bed spread I had as a kid, the toys I played with then, and the ‘Beethoven’ 90s film poster.

IM: There are many recognisable icons and items from the 80s and 90s that pervade your work. Do you work with treasured items? Are you yearning for a return to your childhood years?

BM: I ‘borrow’ from the 80s and 90s overlap of my childhood as it’s a safe place in comparison to the struggles and uncertainty of the present. What’s more, when navigating around this recent past those of us who are old enough can momentarily adopt the gaze of our youth and impersonate someone who has no cares regards the fate of the world. Whilst a younger audience have unwittingly created further bonds with the memorabilia I fashion due to the overwhelming reinvention of the 90s on the high street.

I have never made a work with a treasured item. That is to say that I wouldn’t consider putting the object itself in a work although I’d happily reproduce it a couple or hundred of times? Working with the palette of my past is fun. As I touched on earlier - the 80s 90s overlap didn’t take itself very seriously. Or at least that is what younger me thought. That is why I revert to it during these times or paradigm change. It makes discussing the uncertainty of Brexit easier if there’s a ‘Lucky Charms’ cereal character emanating from the centre of it, or some ‘Looney Tunes’ stars or a stunned Sylvester the Cat are wrapping themselves around a Leerdammer.

IM: Both ‘Love Is’ and ‘Omnipresent Jessica Fletcher’ appear to be in a way deconstructing the way the female form has been captured historically in art. Could you talk about how you examine women’s depiction in art history in your practice more broadly?

BM: The plaster busts in ‘Love is’ are casts of Aphrodite, the Greek goddess associated with love, beauty and procreation. These traits namely correlate with a male and female. I was asked to make a work specifically for Pride in London,so I chose to deviate from ‘this norm’ in replicating the female form instead. So although not directly related to the 60s comic strip of the same name, the intimate pose and the title allude to their subversion of relationship stereotypes and beg the question “why not?”.

My work has long discussed feminist issues and no more so than my #MAMCONCURS series. ‘Mam concurs’ is a paraphrase for ‘mum would agree’ in a mixture of Geordie dialect and Queen’s English. Another trope of my work is a consistent nod to my regional heritage. In this series the selected nostalgia are subtle nods to my geordie roots and aid the refashioning of Old Masters works. This catalogue of ten works sought to document, question and subvert women’s depiction in art history.

I chose to concentrate on women’s representation in art history due to the farcical nature in which we are portrayed. Long is the female the subject and not the surveyor. The manner in which they are displayed is also subjective at best. This seems even more relevant in light of the ‘Me Too’ movement and gender pay gap disclosure of late. I question this, as all equalitarians should be, asking: ‘“Why are women still ‘the second sex’?’’.

IM: In previous works such as ‘264 Red Herrings’ you are mass producing consumer items. Is the labour that goes into making the art objects an integral part of the work for you?

BM: I heart multiples. It’s an interesting conundrum to fashion oneself as both man and machine. This feels especially pertinent as we become ever reliant on new tech. Nowadays a smartphone’s apps can keep us entertained for hours if not days. We can adjust our home’s temperature, play virtual games with our counterparts across the pond, and skype an NHS doctor from the privacy of our homes or on the move. When I was younger cell phones didn’t exist and the internet hadn’t been conceived. This was just two decades ago and so I hold onto the things that I can, or with some education, will be able to do myself.

Endurance art projects have become an integral part of my practice. The labour of making the work may also satiate a slight sadistic quality in me it seems: all of my multiples are made to a precise number which is pertinent to the project (little known fact - there was 264 episodes of 'Murder she wrote' and as such '264 Red Herrings’) and as I start each project there is a degree of excitement.

Until as is so oft the case I realise that human error and tight deadlines mean the sheer quantities that I have promised to produce suddenly feel very unrealistic. The ‘264 Red Herrings’ you speak of was one of these ‘pie in the sky’ projects, as I only had five days to cast and make this whilst producing five other works. It is as if my residency with Bow Arts at Balfron Tower the previous year had taught me nothing - where I embarked on making 3,000 resin sugar mice in ‘The last song I sang to her’.

BM: I have a print of a painting that is in the ‘Leslie Collection’ on show at Orbital, Lewis, Singapore until 4 May 2019. I also have new paintings in ‘New Materialities in the Digital Age’ at Harlesden High Street (7 Bell Yard, London, WC2A 2JR) until 12 December, and Cell Block at Unit G Gallery (117 Wallis Road, London, E9 5LN) until 30 November.

I am also about to go up North to install the next curatorial residency in our gallery SHELF Spanish City next week. Curated by iouae - with some fab artists - if you’re about the North East coast you should definitely come and check it out.